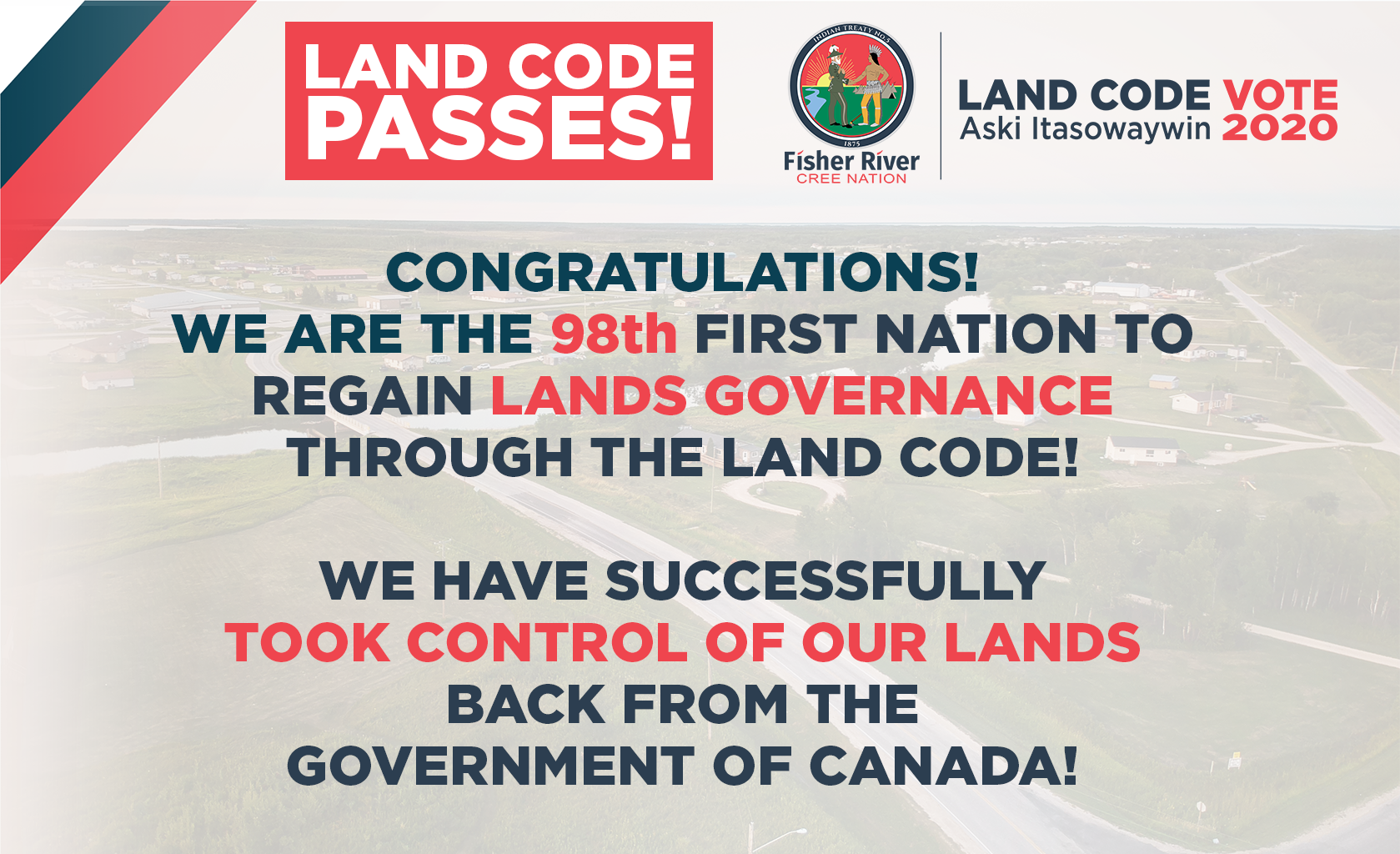 For more information or assistance in regards to this voting event please contact an Electoral Officer:
Shirley N Cochrane (Ratification Officer)
Email: [email protected]
Colleen Amos (Deputy Ratification Officer)
Email: [email protected]
________
A Land Code is a comprehensive law created by a First Nation to replace the 32 sections of the Indian Act that relate to land management. When members of a First Nation vote yes to a Land Code, the Government of Canada no longer has a say in how the community’s reserve lands are managed.
In preparation for Land Codes, the Framework Agreement on First Nation Land Management was signed in 1996 by 14 First Nations and Canada as the initiative for First Nations to opt out of the land management sections of the Indian Act and assume responsibility for management and control of reserve lands and resources. This Framework Agreement guarantees that First Nation title and rights are not affected by Land Code.
Transparency is also built into the Land Code in several areas:

The main benefits of a Land Code come down to four related, overlapping areas: moving a step closer to self-government, creating greater potential for economic development, gaining more control and having the same weight as the Indian Act in court.
On- and off-reserve members are involved in every step of creating the Land Code and are kept informed of how Chief and Council are maintaining and managing the land. This movement toward self-government and self-determination is an opportunity to reclaim the individual history and right to govern lands of each First Nation. It is a chance to restore traditional values into everyday modern practices.
Economic Development: Land Code removes administrative hurdles that the Indian Act imposes and allows for new rules and procedures on revenues from natural resources and how land and money generated from the land are managed. With the power to make decisions, the First Nation can create more favourable conditions for business, deal directly with companies, industry and municipalities and improve communication and time management, making processes move faster and more efficiently.
More Control: Creating a Land Code returns control to a First Nation so that they can exercise the powers, rights and privileges of an owner in relation to their land. They can enter into contracts; borrow, expend and invest money; be a party to legal proceedings regarding the land; and regulate, control or prohibit land use and development, including zoning and subdivision control. Land transactions can happen much faster and cheaper without Canada as an intermediary.
Equal weight as Indian Act: Land Code, once enacted, holds the same authority as the Indian Act in court. The Land Code is approved by the members of the First Nation that it applies to, not by the Minister.

SAFE HALLOWEEN DRIVE-THRU Saturday October, 31, 2020 | 1:00pm - 4:00pm Fisher River Entities will be hosting a Drive Through Safe Halloween on Saturday Oct. 31, 2020 at the Community Center starting at 1:00 PM to 4:00 PM. People will drive in one way and exit out the other driveway, they will remain in their vehicles and a bag of candy will be brought to you and your occupants. All […]