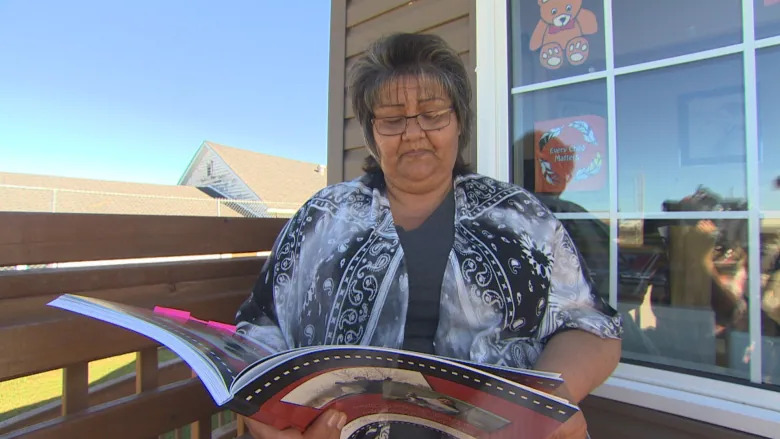 Carol Cochrane sits on a bench, a glossy new cookbook perched on her lap.

She’s in the centre of town at Fisher River Cree Nation, about 175 kilometres north of Winnipeg. Her feathered, salt-and-pepper hair blows in the breeze as she flips through the pages and reads some passages aloud.

“Me and my great-grandfather used to get fish in the bay before the water was polluted,” she reads from the book she was instrumental in helping create. “I would help him lift his net and get the fish fresh in the morning, then start filleting the fish to save and have for a meal.”

The award-winning cookbook is called The Forgotten Traditional Foods of Fisher River, and it was created with diabetes in mind.

Cochrane was Fisher River’s diabetes support worker for a decade, and she believes the book could help her First Nation in its fight against the disease.

Forgotten Traditional Foods aims to reconnect the community with the natural diet and active lifestyle enjoyed by their ancestors, while encouraging them to learn traditional outdoor skills that have gradually been slipping away. She got the entire community involved, collecting recipes, sharing tales and building skills among young people.

The cookbook was first put together with a photocopier but has since been professionally published by the University of Winnipeg. It’s in English and Cree, and includes heirloom family recipes like deer meatballs, elk meatloaf, dandelion coffee and wild rice and mushroom casserole. It also features stories like the one Cochrane is reading, passed down by elders and knowledge keepers.

“We used to eat fish two or three times a day,” the story says. “It was never fried, but boiled or open-fire roasted. It was healthier.”

The book has been ordered by customers as far away as Hawaii, China, Australia and Europe, and is a big hit with some top food connoisseurs in Paris. It won two top prizes at Gourmand magazine’s 2021 World Cookbook Awards, in the natural foods and university press categories, giving the authors the right to put the Gourmand “Best in the World” label on it.

“I’m very happy and excited by how far our Cree cookbook has gotten, being purchased by many people, many different cultures all over the world,” Cochrane says.

Cochrane also made sure the book included a handy reference section covering everything from portion sizes to tips on preserving food.

“We’re never going to go back to how our people lived years and years ago,” Cochrane says. “But as First Nations people, diabetes is rampant because of the change of our diet and our lifestyle. And if we can bring back some things from our past to help us to address diabetes today, I think our future for our youth would be healthier.”

Reviving those traditions could be part of the solution to a growing problem. First Nations people are 3½ times more likely to get Type 2 diabetes than other Manitobans. They’re also more likely to experience severe outcomes, like advanced kidney disease and amputation, according to a report from the Manitoba Centre for Health Policy.

Meanwhile, 50 per cent more children in Manitoba are getting Type 2 diabetes compared to 10 years ago, with Indigenous children being 25 times more at risk than other kids.

“The youth weren’t aware of how to trap and how to hunt and how to clean a fish or clean a goose. That skill and knowledge was being lost,” she says. “And today we have a lot of hunters and trappers in our community and our youth.”

“I’ve had my struggles with diabetes,” Selkirk says. “But now, I get outside as much as I can. I never used to be like that. I used to stay in all summer, stay in all winter, but now I get out, drink my water and try my best to be active.”

The school course is filled with activity, not sitting in a classroom.

“I don’t even remember the last time we’ve done paperwork in this class,” Selkirk says. “It’s all hands on. I’ve learned so much more than I’ve ever did in any other class.”

“We’re taught to be physical,” Wilson says. “We’re able to learn so much more about ourselves, how our culture is, and how to maintain a good lifestyle.”

“We get the students to do what our elders would have been doing,” Mason says. “Hunting, fishing, trapping, those types of things.”

At the community’s youth cabin, on the edge of Fisher Bay, the glimmering, aquamarine water of Lake Winnipeg stretches as far as the eye can see. The teenagers go for a canoe ride, then help hoe rows of dirt in the youth cabin garden.

“You’re never going to get the garden done at that pace,” Mason yells at them, with a thundering laugh.

Ankle-deep in soil, Wilson fires back, wanting that part cut from the CBC interview. Mason chuckles some more then starts a little tour of the grounds.

“Right now there’s only potatoes in there,” Mason says, making a sweeping gesture as he surveys the garden plot.

Most of the youth are capable of living off the land when they finish the program, he says.

He doesn’t teach them alone. Local elders and knowledge keepers are invited to every session to share their wisdom and expertise with the students.

“They not only learn to hunt, they learn to process and cook it and share their food with the elders.”

Type 2 diabetes wasn’t much of a problem when Mason was growing up, he says.

“I was actually brought up with my grandfather and grandmother, hunting and fishing and trapping and farming,” Mason says.

“They never really went to the store. They were never sick. My grandmother lived to be 100 years old. I was really fortunate to grow up in that lifestyle, unlike today, we’re far from that.”

Mason’s face turns sombre as he smooths his silver hair under the brim of his beige sun hat.

“Every day we hear about something that’s happened to somebody because of diabetes,” he says. “It’s scary because the next generation, are they just going to continue in that trend?”

Not if it’s up to Selkirk and Wilson. The teens say the things they learned in Gerry’s outdoor ed class are making a difference.

Wilson’s father has Type 2 diabetes. He’s been offering his dad some of the food he learned about in the program.

“It’s very healing and it’s not, like, something you have to worry about it being sugar free,” Wilson says. “It’s just natural, and he actually says he feels better after eating that way.”

Wilson is now working toward his dream of being a fashion entrepreneur, while Selkirk just started her studies at the University of Manitoba, with plans to be a teacher.

“I want to work with little kids and teach them my traditional culture,” she says. “I never want that to be lost again.”

One of the ways those traditions are being preserved is through the cookbook, which is full of images of the community’s youth. Mason took all the snapshots in The Forgotten Traditional Foods of Fisher River.

“The first edition was, you know, Xerox copies,” Mason says. “And then we thought, well, maybe we could take it a little further and get it published.”

Around the same time, Prof. Shailesh Shukla, who teaches in the University of Winnipeg Indigenous studies department and has done research at Fisher River Cree Nation, was thinking the same thing.

Shukla initially suggested the cookbook to Cochrane and Mason, based on work he’d done with Indigenous people in India and Nepal. He also helped get it published.

“Food can counteract negative feelings and negative impacts of colonization in a more positive way,” Shukla says. “So it has nutritional benefits, health benefits, but also, it has long-term healing.”

It also can help with food access and food costs in northern Manitoba, he says.

“In certain northern Manitoba communities, the rate of food insecurity is as high as 70 per cent,” Shukla says.

Food insecurity is described as not having enough food or not having access to food that provides adequate nutrition.

Highly refined wheat and rice flours also have high glycemic values, which can make blood sugar spike higher and more quickly. Grains like barley and pulses have a lower glycemic index and can help diabetics improve their health.

“There was a nutritionist who was working on making chickpea bannock flour instead of wheat flour, which for diabetes, chickpea flour would be wonderful,” says Shukla.

Shukla and his department have been steadily shipping cookbook orders to Indigenous people across North America and worldwide.

He’s even talking with an Anishinaabe community in Manitoba about developing a similar cookbook.

Back in Fisher River, Cochrane says the book is helping people, along with other community programs targeting diabetes. Those include grocery store tours, home visits and the highly popular diabetes breakfast, a weekly event where people get their vitals checked while enjoying a light meal and a round of bingo.

“The rates here in Fisher River are not very high compared to other First Nations communities,” says Cochrane, who used to be part of the First Nations Manitoba Diabetes Council.

The Fisher River Health Centre estimates about 15 per cent of First Nation members are diabetic, which is lower than the Canadian average of 17.2 per cent on reserve.

“We’ve overseen the diabetes programs in all 63 reserves,” Cochrane says. “So hearing their stats, I’m satisfied to know that we are on a good road.”

Cochrane hopes other First Nations consider creating their own cookbooks, both as tools to fight diabetes and a way to reclaim their heritage.

“Our food is sacred. Our food is our medicine. Our food is part of our culture and our identity,” Cochrane says. “We can’t allow that to be lost.” 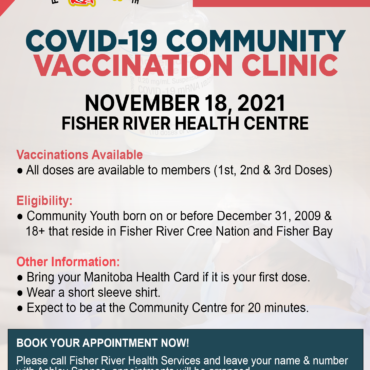 The next Vaccination Clinic is Tuesday November 23 & Friday November 26. Please call 431.256.0395 to book your appointment. Please note that we will not be taking appointments for Ages 5-11 for these Clinics; we will announce when we will begin. 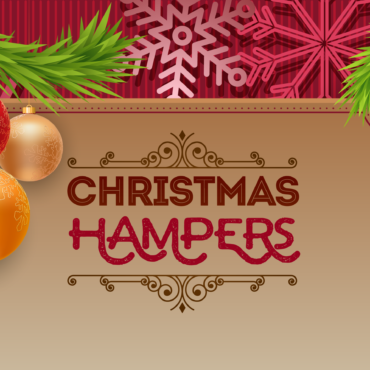 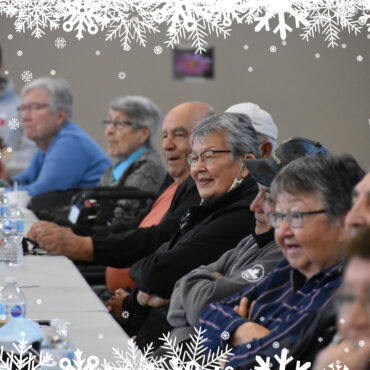